Steven D. Leach, MD, a surgical oncologist, and pancreatic cancer researcher, leads Dartmouth Cancer Center, a joint enterprise of the Geisel School of Medicine at Dartmouth and Dartmouth Health. Leach serves as a professor in multiple departments within Geisel and Dartmouth’s Guarini School of Graduate and Advanced Studies.

Recruited from Memorial Sloan Kettering in 2017, Leach previously held the David M. Rubenstein Chair and was the inaugural director of the Rubenstein Center for Pancreatic Research. In that role, Leach directed a large research team focused on the biology, genetics, and treatment of pancreatic cancer. Prior to that, Leach spent 14 years at Johns Hopkins University, where he served as the Paul K. Neumann Professor in Pancreatic Cancer, chief of the Division of Surgical Oncology, and vice-chair of academic affairs in the Department of Surgery. 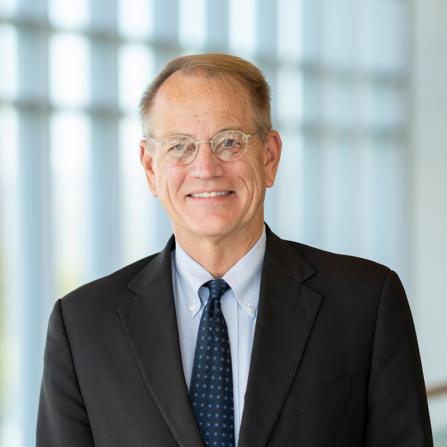 Our cancer center is integrated across all of Dartmouth College and Dartmouth Hitchcock Medical Center and Clinics. And it's this integration—this interaction—that drives innovation.

In addition to his clinical and administrative roles, Leach continues to lead a highly productive research lab focused on pancreatic cancer biology. Among his many scientific contributions and professional honors, Leach was named a Fellow of the American Academy for the Advancement of Science in 2018. Leach has also served as chair of the Pancreatic Cancer Action Network’s Scientific and Medical Advisory Board and as a member of the Princeton University Board of Trustees.

A graduate of Princeton University, Leach earned his medical degree at Emory University, followed by a residency at Yale University. There, he served as chief resident in general surgery and completed a research fellowship in surgery and cell biology. Leach completed an additional fellowship, in surgical oncology, at MD Anderson Cancer Center.