CAR T-cell therapy for cancer patients is an emerging form of immunotherapy. It involves supercharging a patient’s T cells so that they can recognize and attack cancer cells.

The immune system is made up of cells and organs that protect the body from infection. T cells are a type of white blood cell that is naturally produced by the immune system. T cells seek out and destroy abnormal cells and other antigens (foreign substances). Sometimes, however, T cells don’t recognize cancer cells or cannot fully destroy all of them. To improve the cancer-killing ability of T cells, they can be genetically altered.

The therapy begins by collecting blood from the patient and separating the T cells from the blood. The remaining blood components are returned to the patient. This procedure is called apheresis.

Next, the separated T cells are genetically engineered to produce receptors on their surface called chimeric antigen receptors (CARs). These receptors allow the T cells to recognize and attach to a specific protein (or antigen) on tumor cells. The specially engineered cells are expanded in the laboratory by the millions before they are infused back into the patient after chemotherapy.

After the CAR T cells are infused back into the patient, the cells continue to multiply. With guidance from their engineered receptor, they recognize, attach to, and kill cancer cells that have the antigen on their surfaces.

Patients who receive CAR T-cell therapy remain at the Cancer Center for a period of time so that they can be monitored for side effects and their response to the treatment. 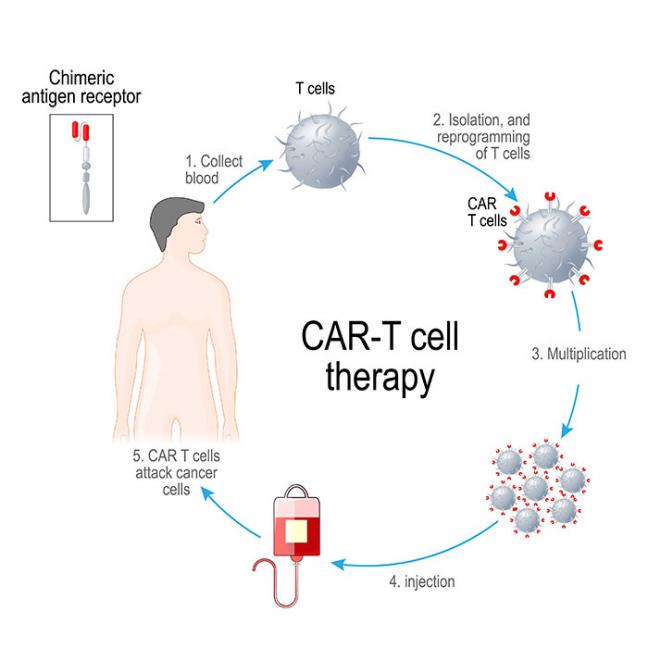 Currently, the FDA has approved CAR T-cell therapies to treat:

Several other similar CAR T-cell therapies are being developed and tested in clinical studies for other blood cancers, including forms of leukemia, lymphoma, and multiple myeloma.

To discuss if CAR T-cell therapy is a potential treatment option for you or to refer a patient, please call the Transplant and Cellular Therapy Program at (603) 650-6432.